Moonbeams Lilacs & Roses
0 out of 5

This bold and unique necklace is part of Miriam’s African Dreams Kalahari Collection, named for the beautiful Kalahari Desert in Southwestern Africa.

In its solid black form, Onyx is considered the most traditional black gemstone, but it is not as common as translucent varieties of onyx banded with white quartz. Miriam combined large round and disk-shaped solid black onyx with handcrafted barrel-shaped Kazuri Speckled Ceramic beads – and a variety of handmade bronze accents – to create this extraordinary one-of-a-kind necklace. The bronze accents are Old World Bronze(TM). Each bead is handcrafted using an old-world wax method and bronze recipe developed by the Charveaux family of metalsmiths in Scottsdale, Arizona. As it ages, bronze develops a beautiful patina that enhances the individual character of each piece.-The full length of the necklace is approximately 20.5 inches, including the handwrought and textured clasp.
-Ten Round Black Onyx beads are 20mm in diameter
-Flat Black Onyx disks are 10mm x5mm
-Kazuri Speckled Barrels (four large) are  26mm x 25mm
-KazuriSpeckled Barrels (two medium) are 23mm x 22mm
-The four larger and beaded Bronze accent beads are 10mm x 5mm

-The four Bronze discs/spacers are 10mm.

-The four “wavy-scalloped” Bronze spacers are 9mm
-The necklace is strung on a metallic antique bronze-coated 0.024-inch 49-strand beading wire.

Looking for a different style in a Kazuri or Ceramic and Gemstone necklace? Click here to see all Miriam’s current designs. Or contact her for a custom design.
Contact Seller

The Kazuri beads Miriam selected are because the speckled colorations reminded Miriam of the Kalahari lions, a subspecies of lions that live in the Kalahari region. The bead glazes show the same distinctive black, golden and reddish brown that distinguish the manes of the male lions that patrol the Kalahari Desert. These fiercely territorial and bold males patrol invisible boundaries, father the cubs, and discipline the unruly. The graceful, golden brown lionesses make up the majority of the pride, mothering the future leaders and bringing down the prey that will feed the pride and sustain its strength.

KAZURI BEADS are imported from Kenya. Kazuri is the Swahili word for “small and beautiful”… And Kazuri beads are beautiful. Lady Sarah Wood and two African women began making the colorful beads in 1975 on the lawn of Isak Dinesen’s Kenyan coffee plantation, the same plantation seen by millions in the well-known movie “Out of Africa.” Today, this bead business offers employment and income for more than 200 Kenyan women living near the foothills of Mt. Kenya, who are often the sole providers for their children and families. Each bead is shaped by hand from clay – fired, painted, fired and glazed, and then fired again in an electric kiln. Up to five different colors may be used on one bead to create the pattern, and no two beads are exactly alike. The beads used in this necklace are intricately glazed in, “tomato” (a reddish-brown), pewter, black, and metallic gold, which glistens in the sunlight, alongside the solid black onyx from Miriam’s private collection of stones.

Please see the our refund policies at https://moonbeamslilacsroses.com/faqs.html

Please see our policies at https://moonbeamslilacsroses.com/faqs.html 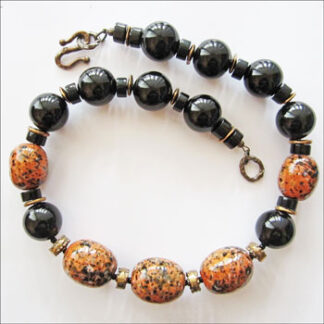