Senor Campos Salsa
0 out of 5

A true story of Stephen Paul Campos who enlisted in the U.S. Army during the Vietnam War. Compelling, real, true with nothing left out to image. Fourteen years after the war, no the brink of insanity he has a Spiritual Awakening that saves his life and alters his path in life.

A true
story of Stephen Paul Campos, my story, of a reluctant U.S. Army soldier
sent to fight in Vietnam in 1968, just as the Vietnam War was escalating. After
his platoon of mostly inexperienced young men experiences a horrific “friendly
fire” tragedy two weeks into their tour of duty, a shaken Campos and his two
closest combat buddies (a common day “Three Musketeers”)  make a vow to “die for each other” one another
and reunite after the war.

Be the first to review “Charlie Doesn’t Live Here Anymore / signed copy” Cancel reply
No more offers for this product! 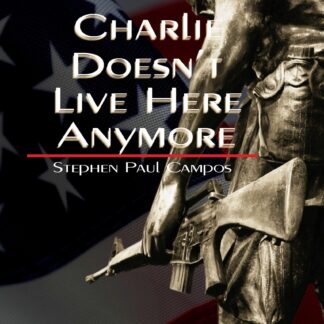