Moonbeams Lilacs & Roses
0 out of 5

A Dumortierite Necklace in a unique collar design showing a variety of the natural stunning colorations of this beautiful stone. Miriam thought the colorations of each stone seemed to be dancing in a romantic waltz. She chose stones in the full range of dark navy blue to lighter blues, some with a touch of violet. Even the Sterling Silver Clasp is formed into a romantic gentle swirl. Like all Miriam’s boutique necklaces, this is a one-of-a-kind item.

Looking for a different style in a Blue Gemstone necklace? Click here to see all Miriam’s current designs. Or contact her for a custom design.
Contact Seller

Dumortierite ranges from very deep navy blue to a lighter blue, to a rare violet. It was first described in 1881, and named for French paleontologist Eugene Durmortier (1803-1873). Some stones may also show areas of brown, pale orange, pink, a bluish-green, and green. Often confused with Lapis Lazuli, Dumortierite also looks similar to Sodalite. The differences are that natural Lapis has streaks of Goden Pyrite, and Sodalite exhibits small-to-large areas of White Calcite. Most gem-quality Dumortierite is found in Nevada (USA). Other localities include Australia, France, Madagascar, Mozambique, Norway, South Korea, Sri Landa, Canada, Poland, Namibia and Italy.

Be the first to review “Lovely Blue Dumortierite in A Romantic Collar Design” Cancel reply
No more offers for this product!

Please see the our refund policies at https://moonbeamslilacsroses.com/faqs.html

Please see our policies at https://moonbeamslilacsroses.com/faqs.html 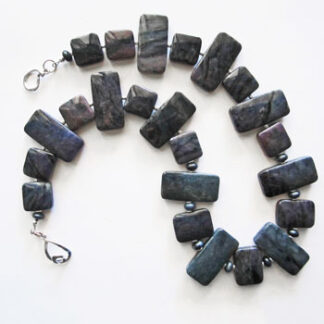 You're viewing: Lovely Blue Dumortierite in A Romantic Collar Design $585.00
Add to Cart